*Shakers Cigar Bar's building was founded in the year 1986 and was meant to serve as a Shlitz Brewery cooperage house, however over the years it would serve many different purposes as well. It was sold in 1905, and was used as a distribution center and it was sold again in 1922 to become the city's newest speakeasy as well as "soda distribution company" which was owned by Al Capone. In all actuality, he was running liquor, under the disguise of a soda bottling company, during this prohibition period as well as running the new speakeasy. None of the architecture or antiquities in Shaker's is indigenous to the building, not even the authentic tin ceiling which actually came from a razed Plankinton Mansion. This could be one reason they have a bevy of different spiritual entities, since each architectural piece came from a different location. In addition to that there was a young girl named Elizabeth, who reportedly died in the 1850s by falling from an apple tree in the orchard that was behind the cemetery where the building now stands on top of many graves that were not moved for the construction of the building. The fall resulted in Elizabeth breaking her neck instantly. She has been spotted several times in the ladies room and has often times frightened guests by knocking on the bathroom door, people have also reported seeing 19th-century style shoes under the door. A photograph of a young girl that is now located in the women's bathroom came with the building when it was bought by the recent owner and there have been many occasions when the photo has been relocated in the bar... but no one moved it.

In the basement, employees experience a lot of activity due to the murder that happened down there. Two men were reportedly killed during Prohibition in the ’20s. A group of city officials were having a meeting here and drinking—as they usually did—when a fight got out of hand. Today there’s a 7-foot by 3-foot line in the foundation and no clear reason for it, leading many to believe a murder victim was buried here. Also, there are many psychics who have witnessed many spirits in many investigations that could also be linked to the bodies from the cemetery that the building now rests on top of.

In addition to the spiritual activity inside the bar itself, you can sleep over in the *haunted Penthouse which was a former Prohibition Era Brothel - the scene of the brutal hacking murder of a poor ill-fated bordello girl. When the penthouse was being remodeled by the owner, he found several human bones in the walls that were confirmed as human by the FBI. Unfortunately due to them being so old, they did not want to open an investigation.
The cost of a one night stay is $350.00 and includes a wood fireplace, jacuzzi, and private outdoor deck in this period bordello room. You also get complimentary period absinthe cocktails for two.

*There is a link in the side bar, "Local Haunts" to Shakers website where you can find more information about the bar and there is also a link from the page to the "Milwaukee Haunted Bar" page with info on how to reserve an overnight stay in the penthouse.

----------------------------------------------------
Here are some photo's I took while on the Ghost Tour with my husband.. I got photo's of the women's bathroom where the spirit of Elizabeth is usually spotted as well as the photographs that were left behind and is often randomly placed throughout the bar. There are also shoots of the basement, where A LOT of orbs were picked up in the photos, and the penthouse where the bordello girl was murdered and the bones were found. I got a shot of the outside area where the apple orchard was as well. 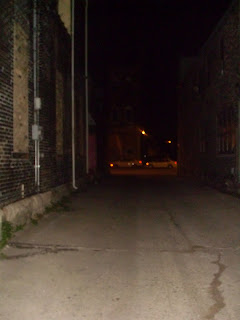 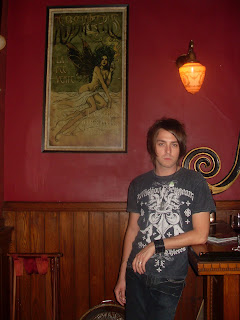 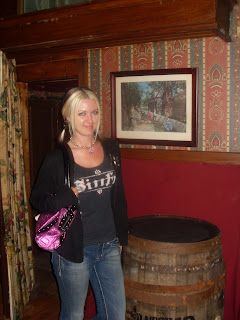 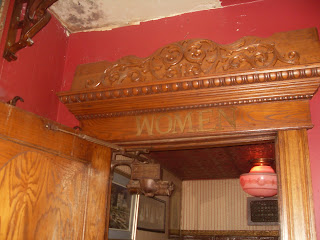 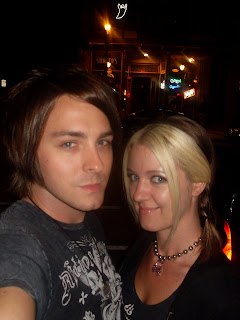 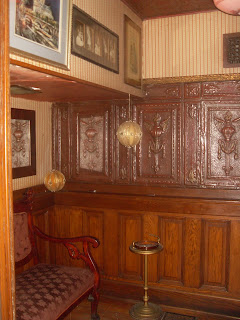 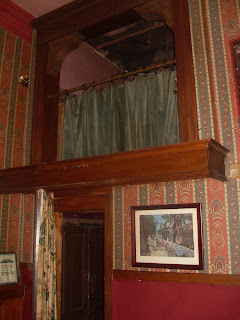 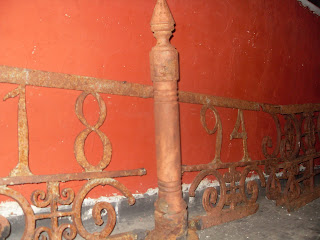 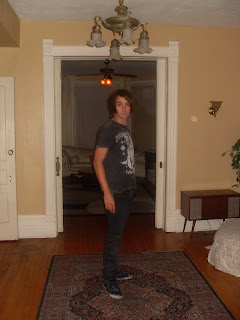 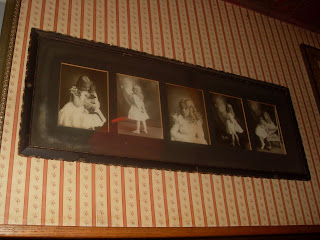 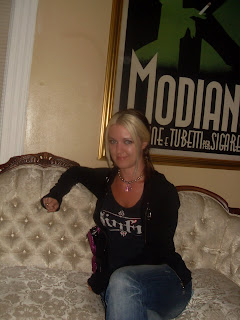 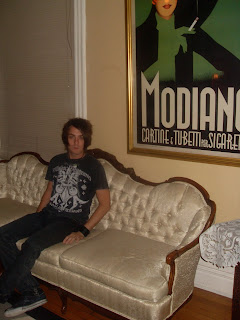 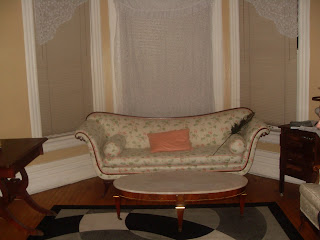 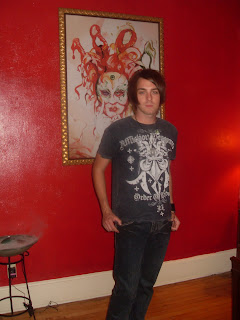 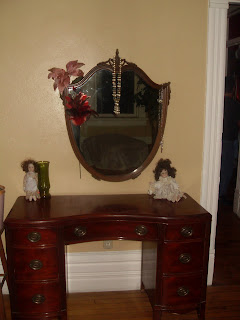 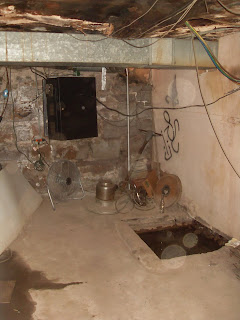 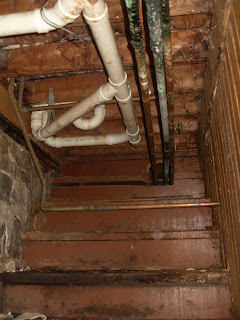 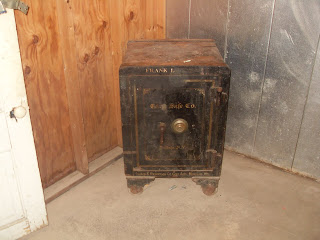 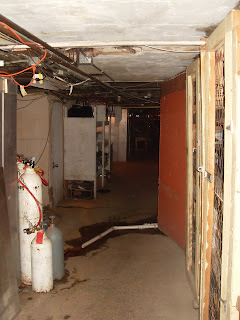 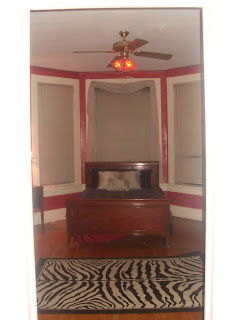 Ghost hunters do it in the the dark! 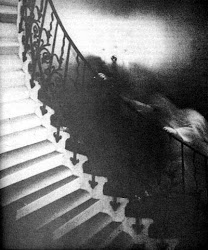 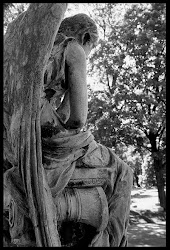 "The poor were buried naked without any personal items enclosed. Many coffins contained two bodies, and a surprising number of skeletons have been found with severed legs or missing lower limbs. The explanation for this fact could lie in the decision to purchase coffins less than four feet long, necessitating amputation at time of burial." -Michael McBride on Potters Field Cemetery 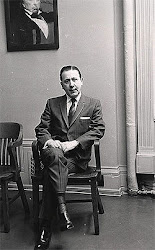 "He called me a name - to my face - and now they can't find his skin!" -Frank Balistrieri 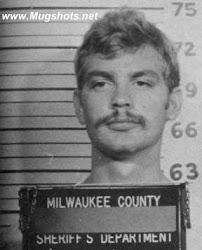 "I didn't want to keep killing people and have nothing left except the skull… This is going to sound bad, but … should I say it? … I took the drill while he was asleep…" -Jeffrey Dahmer 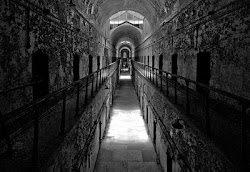 "The Iron Gag was the most commonly used punishment, and the one most feared by the prisoners. It was a sharp device that was placed over the inmate’s tongue while his hands were crossed and tied behind his neck. His arms were then pulled taut and the hands secured just behind the man’s neck. The gag was then attached to his tongue and his hands and locked in place. Any movement of the hands would tear at the gag and cause intense pain. The inmate’s mouth would be bloody and sore by the time he was released from their bonds. Some inmates lost there tongue before passing out in pain." -Troy Taylor 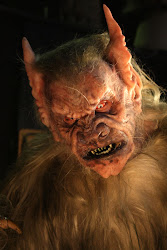 Rated the #1 Greatest Haunted House in the US: Netherworld

"The performers are outstanding, the movie quality special effects are riveting and the detailed sets are chillingly unique. If you're a diehard thrill-seeker, this is one attraction that will scare the jeepers creepers out of you." -Fangoria

Visit My Other Haunts